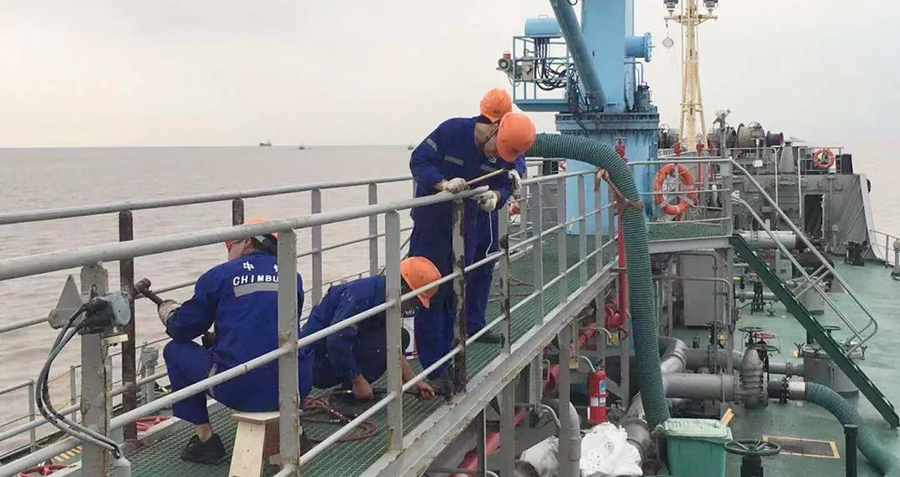 (1) Manual derusting tools include chipping hammer(impa code:612611,612612), shovel, deck scraper(impa code 613246),Scraper Angle Double Ended(impa code:613242), steel wire brush, etc. generally thick rust spots are knocked loose with hammer and then eradicated with shovel. Due to high labor intensity, low derusting efficiency, generally 0.2 ~ 0.5m2/h, harsh environment, it is difficult to remove dirt such as oxide scale, poor derusting effect, and it is difficult to achieve the specified cleanliness and roughness, which has been gradually replaced by mechanical and chemical methods Replaced by. However, this method is often used in the process of ship repair, especially in the repair of local defects; Manual derusting shall also be applied to parts that are difficult to reach by mechanical derusting, such as narrow cabins, corners and edges on the back side of section steel and other areas with difficult operation.

(2) There are many tools and processes for mechanical derusting, mainly as follows.

1. Small pneumatic or electric derusting. It is mainly powered by electricity or compressed air and equipped with appropriate derusting device for reciprocating motion or rotary motion to meet the derusting requirements of various occasions. For example, Electric angle grinder with steel wire brush,pneumatic needle jet chisel (impa code:590463,590464),pneumatic derusting brushes(impa code:592071), pneumatic scaling hammer(impa code:590382), tooth type rotary derusting device, etc. belong to semi mechanized equipment. The tools are light and flexible. They can remove rust and old coating completely. They can roughen the coating. The efficiency is greatly improved compared with manual derusting, up to 1 ~ 2M2 / h, but they can not remove oxide scale, and the surface roughness is small, It can not achieve high-quality surface treatment quality, and the work efficiency is lower than that of spray treatment. It can be used in any part, especially in the process of ship repair.

3. high pressure cleaner(impa code:590736). Using the impact of high pressure water jet (plus abrasive grinding) and water prying destroy the adhesion of rust and coating to the steel plate. It is characterized by no dust pollution, no damage to the steel plate, greatly improve the derusting efficiency, up to more than 15m2 / h, and good derusting quality. However, the steel plate after derusting is easy to rust back, so it is necessary to apply a special wet derusting coating, which has a great impact on the coating of general performance coatings.

4. Shot blasting-Electric scaling machine(impa code:591217,591218),deck scaler(impa code:592235,592236,592237) ,electric rust removal surface cleaing macine,large area deck scaling machine 110V,220V,440V).Shot blasting is to use the high-speed rotating impeller to throw the abrasive to the steel surface to achieve the purpose of rust removal. It is a more advanced mechanical treatment method for rust removal of hull steel materials. It not only has high production efficiency, but also has low cost and high degree of automation. It can realize assembly line operation with less environmental pollution, but it can only be operated indoors.

(3) Chemical derusting is mainly a derusting method that uses the chemical reaction between acid and metal oxide to remove the rust products on the metal surface, that is, the so-called pickling derusting can only be operated in the workshop.